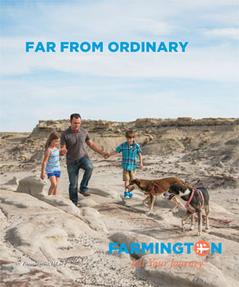 There is no shortage of activities for all in the family in Farmington. The variety creates a virtual playground for adults and children alike.

Outdoor activities? Definitely. What’s your greatest pleasure? Nature photography, hiking, mountain biking, off-roading, fly-fishing in a riverine wonderland, golfing in high-desert beauty, or maybe exploring the mysterious Bisti Badlands? Farmington is surrounded with fascinating national parks and monuments. Visit the Aztec Ruins and Salmon Ruins nearby or take a day trip to the grandest ruins of all at Chaco Canyon. Let your children—and their imaginations—wander among the remains of earlier civilizations.

Or stay in town and visit the Farmington Museum to learn more about the history of this intriguing area. You’ll discover why Farmington was named “The Official Best Family Getaway in New Mexico – 2013.” By who or what organization? Having this answered will give the city more credibility, otherwise it sounds like it is self-proclaimed

Incorporated in 1901, with a population of 546, Farmington today is a city of about 45,000 people. Its main industries are oil and gas extraction and coal mining. Farmington is also the home of San Juan College, a two-year institution.

It is located at the juncture of the Animas, La Plata and San Juan rivers, and is a commercial center for four states. As such, Farmington is the gateway to the Four Corners, a geographic spot where New Mexico, Arizona, Utah and Colorado meet in 90-degree angles. Visit the commemorative installation and stand in four states at once! The Four Corners area is the traditional homeland to the Navajo Nation, the largest Indian tribe in the United States, with roughly one-third of its population living in New Mexico. The Navajo reservation covers more than 27,000 square miles throughout Utah, Arizona and New Mexico, and its lands border Farmington. Navajo and other Native American arts can be found in trading posts and galleries in Farmington, and the Navajo culture has added to the fabric of life in the city.

Farmington also has a number of signature events each year that add to the excitement of visiting this charming city. Upcoming events include:

Four Corners Storytelling Festival – Oct. 9-10, Berg Park and Totah Theater. Kick back, and listen to traditional tales told by some of the very best national and local storytellers. This festival features stories of all varieties: ghost stories, family stories, folklore and myths will delight all ages.